Subscribe today and get your news early, directly in your inbox! Click here!
Home » Issue #24 » "Forgotten Words" by Ian Tamoran

We know the accepted words. These are commonplace: we speak them and read them all the time. But what of the rejected words, the words that didn’t quite make it into the language, or were there only briefly and then dropped? English has many of these: fadge, glood, gnast, paughty, serang, theow, hoolock (interestingly, the word that follows “Hooligan” in my copy of The Shorter Oxford Dictionary – hi there, la Mha!), oppilate, rasant... It is a mark of a mature language that its words change. There are so many English words that the Greater Oxford Dictionary (and, no, I do not have a copy of that) has more than a quarter of a million root forms, excluding inflexions. Some measures put the number of different English words at over a million. Now, I do not know two hundred and fifty thousand different words, plus proper names and technical terms. No one does. 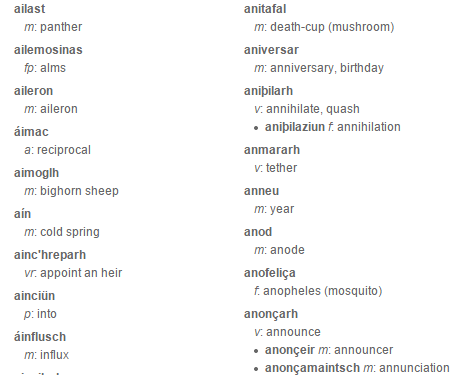 The number of root forms in English, known by an intelligent and educated speaker is in the range 35,000 to 70,000 (excluding, as always, proper names and technical terms). A typical eight-year old will have a vocabulary of 8,000 words. It is perfectly possible to have deep and involved discussion with an eight-year old – try it at bed-time! If an adult has a vocabulary of 8,000 words in a foreign language, then s/he might well be classed as speaking the language reasonably fluently. Adding variety of words does not always increase the depth of thought. Repeated evidence suggests that upon certain definable temporal occasions the utilisation of phraseology of non-ambiguous direct perspicuity is a quasi-mandatory requirement of the interlocution, ameliorating the trans-elocation of the requisite semantic content. In other words: to be understood, sometimes you must speak clearly.

So how about the size of the Talossan dictionary – how many words are there in el bel glheÞ? The website of the Association of Talossan Language Organisations (talossan.com) claims that there are over 35,000 words, plus inflexions – as rich as many English speakers have in their own first language. So there is an argument that Talossan is now rich enough – few of us have time to learn even that many words in what is, for all of us, a foreign tongue.

But rich enough for what? We can certainly express laws in Talossan, and have done so. We can make Royal Pronouncements, and Christmas carols, and comic operas, and “tales of mystery and the imagination”, and curses, and poems, and prayers, and fiction (both science and allegorical). When they are needed, we can generate new words – and if, for example, we were to start discussing Quantum Theory or Differential Calculus or Byzantine Heretical Sects, we would need them. OK – we are unlikely to start discussing these topics soon (though if anyone wants to talk about the rest-mass of photons I would be more than happy to join in. In English.). We have enough words to translate The Bible or A la recherche du temps perdu (for that we lack, at a first glance, the words ‘proleptic’ – which is not a loss – and ‘pianola’, which could be classed as a proper noun).
Does Talossan, el bel glheÞ, have rejected words? We know that it has – many of the language’s first words have been replaced or modified. Does Talossan have colloquialisms? If you move that it has, I’ll cheerfully mick that. And we are generating new idioms as the language is used. A static language is a dead language.
And that’s the point. If we do not actually use the language it will become a dead language. There is many an Erteier who speaks some Talossan, and a few – just a few – who speak it fluently. The number of speakers is growing – and that’s good – but the number of speakers is small – and that’s bad.