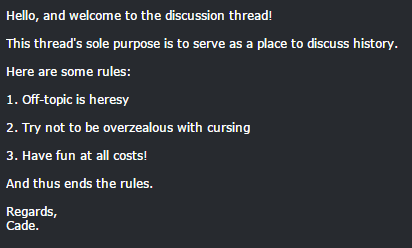 If he who forgets the past is doomed to repeat it, then Talossa is in safe hands. A newly formed historical organization, the Talossan Historians Guild, has rapidly accrued members and embarked upon its first discussion. The THG has opened itself to “Anyone who likes history, enjoys casual banter, and wants to learn something about a historical topic they've never looked into before,” says founder Cade Nettles. Nettles, who first became interested in history while researching the nations in the computer game Civilization, says that his goal in founding the THG was “to have a place to casually discuss history with a few other amateur historians.” As of press time, the THG has embarked on its first discussion, regarding the Thirty Years War and the Holy Roman Empire. Interested citizens may contact S:r Nettles for more information.