Presented below in slightly-updated form are the first two installments of GMiPTH, originally posted to Wittenberg on 2 and 4 August 2006.

2 August marks the anniversary of the death of Raymond VI, Count of Toulouse, in 1222.  Our own former King Louis was, of course, a member of the same House of Rouergue founded by Raymond VI's ancestor Raymond I of Toulouse.  Toulouse is the historical capital of Occitania, the land of the Occitan language, which contributed significantly to the Talossan language.  The name of Toulouse in Occitan is Tolosa.
To continue this round of "six degrees of Talossa," Raymond VI's daughter Constance was the first wife of King Sancho VII (yes, they had seven kings named "Sancho") of Navarre.  Sancho fought valiantly against the Muslim Berbers who then occupied most of Spain (including Seville, or Isiviglha in Talossan)--about as valiantly as he fought against his fellow Christian Spaniards of Castile (Castiglha) and Aragon.  But Sancho's second wife was the daughter of Abu Yaqub al-Mustansir (or Yusuf II), emir of Morocco—a Berber.  Perhaps they met at a Pamplona-Rabat Berber football match, almost like the famous Chilsa and Seltsamet (main characters of "El Taloçait d'Isiviglha," or "The Barber of Seville," the first Talossan opera). 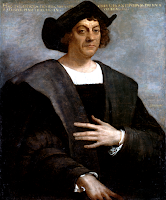 On 3 August 1492, Christopher Columbus set sail from Palos de la Frontera, Spain, on his way to rediscover the New World.  It had already been discovered at least thrice before, of course—once by indigenous Siberians crossing into A
laska, once by Vikings who planted failed colonies in “Vinland”, and once by Berber adventurers, some of whom we believe to have ultimately settled in the land we now call “Talossa”.  But could there have been a connection between Columbus's voyage of discovery and one of these previous expeditions?
Conventional history says that Christopher Columbus came from Genoa, Italy.  But his true national origin has been a subject of considerable debate among historians.  Some say he was really from Mallorca, one of the Balearic Islands.  Others link him to Corsica, Catalonia, Galicia, southern Portugal, or the Greek island of Chios.  What do these six places have in common?  Believe it or not, all of them but Chios were at one time under Berber or Arab-Berber rule!
Corsicans, for example, are infamous for their vendettas, but where do you think they learned the practice?  From the Berber blood-feud!  Corsica is one of the locations to which the Moroccan royal family chose to be exiled in 1953.  (Corsica is also known as the base for the 2nd Foreign Parachutist Regiment of the renowned Foreign Legion—a new connection to modern Talossa.)  Catalan closely resembles Talossan.  And in the initial Moorish occupation of Spain, Galicia was set aside for Berber settlement.  Even Chios was held for brief periods of time by the Ottomans (who had Berbers in their armies), and Genoa was sacked in the 10th century by Arab pirates (possibly actually Berber pirates from the Barbary Coast).
Some historians even believe that Christopher Columbus was a Converso, or a Spanish Jew who had converted to Christianity.  Spain's large Sephardic Jewish population (coincidentally — or not — expelled by Ferdinand and Isabella just days before Columbus departed) had mostly immigrated during the long period of Arab-Berber rule.  Amazingly, some scholars now believe that many of Spain's Sephardic Jews either were of Berber extraction or at least had lived among North African Berbers for centuries and been influenced by their languages.
What does all this mean?  Well, why is it that Christopher Columbus, of all people, dared to cross the western ocean?  Could his confidence have come from the legendary tales passed down in his family of the fantastic lands to the west discovered by his ancient ancestors?  National pride compels us to say "yes!"  After all, can it really be coincidence that his remains were interred in Isiviglha, where Seltsamet planned and departed on his voyage to the “Berber promised land” in El Taloçait d'Isiviglha?