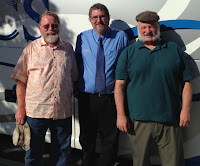 His Majesty King John, Senator for Florencia Pôl d'Aurìbuérg, and the Baron Hooligan met in Denver a few days ago, investigating safety concerns that had been reported about large quantities of grain that had been contaminated with hops and yeast and allowed to spoil.  Worries about problems with such concoctions have preoccupied His Majesty for years, prompting vigorous and regular inspections and copious sampling.
As of press time, it seems as though it was another false alarm, with no reported casualties.  This marks the estimated 37,109th sampling, although exact figures are not available at this time.